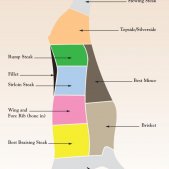 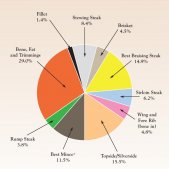 A guide to your cut

The fillet is the least used muscle and therefore the most tender cut of beef. It appears lean with a very light marbling of fat and subtle flavour.

Sometimes referred to as a striploin, is the central part of the back. This cut can be roasted whole or cut into steaks. It is not quite as tender as the fillet with a rich flavour from the light marbling and a strip of fat around one edge. Always a popular choice.

The rump is a juicy cut with lots of flavour. And a rump roast is always popular. A cheaper cut but none the less flavoursome.

Ribeye steaks have a ribbon of fat that runs through the centre and this generous marbling gives this steak a core of flavour. The central ribbon melts away during cooking to leave a fulsome beefy flavour. The ribeye is often known as the butcher’s choice for that very reason!

Click on the images below to find out where each cut of meat comes from on a carcass and how much of that meat we can expect on each animal.

Finding us in the heart of Dorset

Our farm shop stocks a wide range of locally reared beef, pork and chicken as well as seasonal game, free-range eggs, home-made pies, fresh vegetables, dried goods and a selection of superb Dorset produce. Come and see what we have to offer.